Beckman Coulter Life Sciences is taking actions in the best interests of our associates, customers, and business partners as we navigate the growing threats of the 2019 Novel Coronavirus disease (COVID-19). Learn more

By its simplest definition, a cleanroom is a contained space where effort is put toward limiting the presence of unwanted particulates, as well as keeping other environmental conditions such as temperature, humidity and pressure optimized to the work being done.

Across many industries—aerospace, semiconductor manufacturing, military, medical devices, biotech and pharmaceuticals to name a few—cleanrooms are essential to any manufacturing operation where reducing contamination from airborne particles is critical to success.

How important have cleanrooms been to industry? Within only a few years following their initial development in 1960, cleanroom technology expenditures worldwide had already reached the modern equivalent of US $400 billion. Cleanrooms have evolved since then, varying widely in size and complexity, but they still fall into two main categories based on how the air flowing through them is handled:

Also known as nonunidirectional cleanrooms, turbulently ventilated cleanrooms are most often designed to receive clean filtered air from the ceiling through multiple air diffusers (although systems using a single non-diffusing source inlet do exist). Incoming air then mixes with room air as it moves along a fairly unpredictable path, picking up particulate airborne contaminants and finally leaving the room through returns located in the walls at floor level. 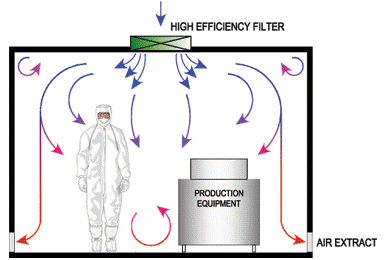 The turbulently ventilated design is most effective for removing larger particulate contaminants such as dust from the air. As such, it’s a system that may be suitable for certain pharmaceutical compounding and packaging applications, but is insufficient for more sensitive biopharmaceutical operations, where the presence of smaller microbial contaminants such as bacteria and viruses can be disastrous (see Classifications & Standards below).

The slower, more circuitous airflow within nonunidirectional cleanrooms leads to another shortcoming: various areas of the room may, for a period of time, “hold onto” pockets of air with low circulation and high particle counts. These are a result of air currents, most often created by the movements of operators and placement of equipment, combined with the unpredictable nature of downward airflow characteristic of this cleanroom type.

Also known as a laminar flow cleanroom, this is the cleaner of the two types—at the expense of requiring a great deal more air to operate. Rather than air diffusers, this setup uses laminar airflow hoods that typically cover anywhere from 35% – 100% of the ceiling space. From these, jets of filtered air are sent straight downward at a constant velocity in streamlines that are nearly parallel to one another.

Floors in this type of cleanroom are typically constructed with raised tiles, perforated throughout to ensure that air can travel along a completely unimpeded path from entrance to exit. After leaving the room, particulates picked up in the airstream are either trapped with vacuum pumps beneath the floor, or removed by the ceiling filters when the air is sent back for recirculation. 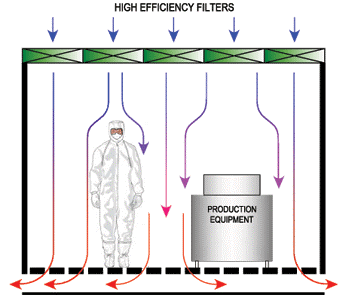 Compared with turbulently ventilated arrangements, unidirectional airflow systems greatly reduce the chance of airborne contaminants moving around the space at random and eventually settling where they shouldn’t be. With parallel airstreams flushing the room from top to bottom, there’s little risk of low-circulation, high-particle-count pockets developing as they invariably do with turbulent, nonunidirectional airflow. Any potential for localized turbulence in laminar flow cleanrooms is further mitigated by the architecture of the room itself—i.e., free of unnecessary features that could become obstacles to smooth airflow.

Larger cleanroom facilities sometimes employ mixed flow ventilation as a way of providing unidirectional airflow to certain ultra-clean areas that require it, without the greater expense of designing the entire room this way. Other areas in the same room requiring less stringent conditions of cleanliness can be outfitted with nonunidirectional-style diffusers and extracts where more turbulent airflow won’t interfere with the cleaner laminar flow locations.

No matter the type of airflow mechanism used, the real power of any cleanroom is in its capacity for filtering the air that moves through it. At minimum, all air delivered to a typical cleanroom passes through ceiling-installed high-efficiency particulate air (HEPA) filters that trap particles ≥ 0.3 µm in size with up to 99.97% efficiency. For operations requiring the highest levels of cleanliness, ultra-low particulate air filters (ULPA, trapping ≥ 0.1 µm particles with up to 99.9995% efficiency) may be used.

It’s easy to visualize airborne particulates and microbial contaminants larger than these threshold sizes being stopped by a simple filter mesh while smaller particles pass through it, yet the actual filtering mechanics are more complex. Particle filtration relies on four main principles: inertial impaction, interception, diffusion, and electrostatic attraction.

Beyond the concerns of airflow and air filtering are several other structural considerations that must be addressed if a cleanroom is to function efficiently and reliably, including:

In biopharmaceutical manufacturing, the potential for ruinous contamination by living microorganisms during processing is an ongoing concern. And, due to the biomolecular nature of the products made in such facilities, it’s the operators themselves who are the chief source. Humans shed around 35,000 skin cells per hour on average2, all of which are potential carriers of contaminating microbes.

Common skin-associated bacteria include Micrococcus, Staphylococcus, Corynebacterium and Bacillus. Contamination by bacterial species from these groups and others can ultimately have an enormous impact on biopharmaceutical product manufacture. At the least, their presence can change product consistency and impurity profiles. Bacterial contaminants can also cause potency loss through enzymatic modification or degradation, and can impart secreted bacterial endotoxins to the product.

In addition, it has been found that fungal species from genera Aurebasidium, Cladosporium, Aspergillus and Pencillium are the most commonly isolated from cleanrooms, with the latter two being the most prevalent found on the human body along with Malassezia spp. Fungal contamination by these organisms can result in spoilage of pharmaceutical products and possibly pose more serious health hazards to those taking them, particularly immunocompromised patients.

To help keep these microbiological sources of contamination in check, cleanroom operators are outfitted with a garment system (boots, gloves, hood, facemask) to provide a barrier between the wearer and the controlled work environment. However, no garment system can ever be 100% effective.

Given that our outer layer of skin can host as many as 1 million microorganisms per square centimeter—20 billion across the average human body—microbes will continue to be isolated from cleanrooms, even of the more stringent classiﬁcations, and where personnel are properly gowned, wearing masks and full body covers, and where aseptic technique is diligently practiced.

In terms of countering bacterial and viral agents, lower-stringency cleanrooms may be sufficient for production of medical compounds meant for oral administration (capsules, tablets and liquids) because, when these are ingested, the gastrointestinal tract generally kills any stray microorganisms ingested along with them. However, parenterals (medicines designed for injection into veins or muscles) enter the bloodstream without these protections and must be produced under a far higher standard of cleanliness. Airborne microbial particulates entering the product must be avoided at all costs. Sterile conditions over a large area are required for parenteral processing operations, and cleanrooms make this possible.

Because we know that microbes do still enter the cleanroom airstream, their presence and concentrations must be known, so that any emerging contamination concerns can be addressed, and a cleanroom’s operational efficiency can be accurately evaluated. The technology doesn’t yet exist to track airborne microbes in real time, so high-precision particle counters are used to detect them indirectly. They do this by sampling a cleanroom environment and providing data on the number of particulates (including microorganisms) within a given size range that occupy a given volume of air. This is where cleanroom classification comes in.

Cleanroom designations in the US were originally given names based on the maximum number of particles of 0.5 µm or larger allowed in a cubic foot of space—Class 1000, Class 10,000 and so on—as defined by the FDA Federal Standard 209E.

While this standard is still in practical use, the International Organization for Standardization (ISO) published its ISO 14644 document series in 2001 to define the "standardization of equipment, facilities, and operational methods for cleanrooms and associated controlled environments." This new standard set was quickly adopted in Europe and officially superseded FED STD 209E, converting imperial units to metric and defining simpler ISO classes according to the familiar particle-based criteria. For example, what was once called a Class 1000 cleanroom has become an ISO Class 6, allowing a ≥ 0.5 µm particle count of 35,200/m3.

The partial table below shows equivalences between the older US classifications (leftmost column) and the newer ISO designations used for some of the most common cleanrooms found in the biopharmaceutical industry.

In terms of cleanliness, rooms rated ISO 8, ISO 7 and ISO 6 are considered “non-stringent” or “intermediate” cleanrooms, sufficient for many pharmaceutical applications. Those designated ISO 5 and below are “stringent” cleanrooms, almost invariably featuring laminar airflow and HEPA-filter ceiling coverage approaching 100 percent. The cleanest of these (ISO 2 and ISO 1) are often required for highly sensitive electronics manufacturing. There is also an ISO 9 designation—the “dirtiest cleanroom”—descriptive of a minimally controlled office space where up to 35.2 million particles/m3 can be expected.

Over the years, several clarifying additions have been made to the ISO document series but the guiding principles stay the same. Although cleanrooms are now categorized for particle sizes as low as 0.1 µm, biopharmaceutical facilities are still chiefly concerned with those 0.5 µm and larger. This is because microbes such as bacteria and viruses are only rarely found in the air as single units and are far more typically attached to larger airborne particles, such as skin cells, in a size range of 10 to 15 µm.

Adding a level of complexity (and for reasons not clearly understood) there are still significant differences between cleanroom standards applied in the US and those used by European Union nations, where a letter grading convention is used in place of the FED STD 209 numbering system:

Current US Good Manufacturing Practice (US cGMP) and EU GMP regulations both require operators to classify and subsequently monitor their cleanrooms for airborne particles according to similar methodologies; however, Figure 2 above highlights a few important differences to keep in mind:

Particularly in the biopharmaceutical industry, economic survival absolutely depends on the safety of the finished product. The possibility of contamination compromises that safety, making it crucial that manufacturers familiarize themselves with:

It should be clear why the cleanroom is an essential component to any biopharmaceutical manufacturing operation—and why maintaining the integrity of the cleanroom environment can’t be left up to guesswork, any more than the pharmaceutical development and testing process itself. 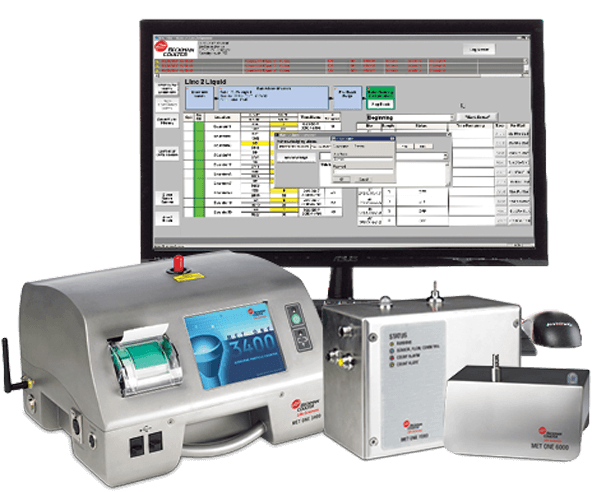 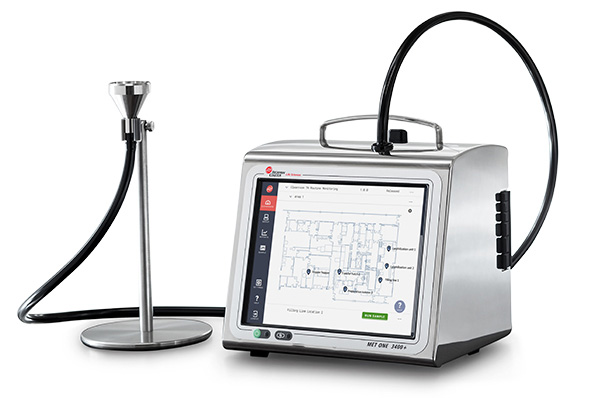 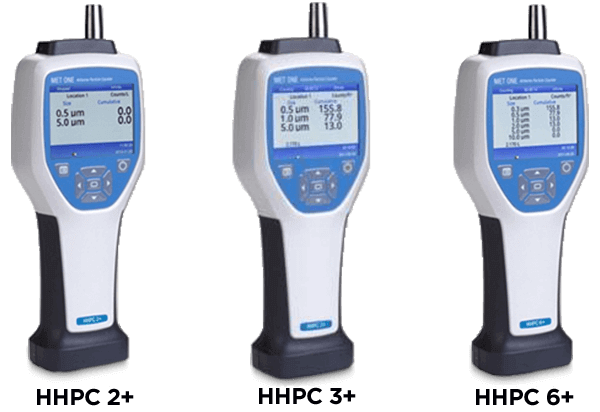 The MET ONE HHPC+ series of handheld particle counters is light weight for checking ISO Class 5 validation (FED STED Class 100) or higher cleanrooms and controlled environments. It has a large screen and easy data download via a USB cable, memory stick or ethernet connection.

﻿
Oops. The page you wanted could not be found, so we brought you to something similar. If you still can't find what you want, try searching our site instead.